The fire element is associated with our ability to see—both through the physical light that illumines things around us and the spiritual light of consciousness that removes the darkness of ignorance. Fire in our hearts and in our wisdom-guided will can provide the energy we need for right action.

Learn how to prepare for Love’s transforming fire.

What Does Fire Element Mean?

The five elements of nature —earth element, water element, fire element, air element, and space element (or ether) are the basic building blocks of all creation. Everything in nature, including our bodies and minds, is formed of the elements. The elements are progressively lighter and subtler as they move from the density of earth to the transparency of air and space. Fire element holds a middle position between earth and water, air and ether, or space. Thus, it is appropriate that one of the primary qualities we associate with fire is transformation.

Along with its heat and ability to radically transform what it touches, fire gives us the light that makes it possible to perceive form. The fire element is associated with the eyes and our capacity to see. The action capacity connected to fire is locomotion, and its organ, the feet. Life on our planet depends on the sun—its heat that warms the earth and its light that makes food possible and allows us to see.

The Presence of Fire Element

The fire element is associated with our ability to see—both through the physical light of the sun that illumines things and the spiritual light of consciousness that removes the darkness of ignorance. Connect with the light, then see clearly.

In California, other parts of the US, and other countries, the imbalance of the fire element during global warming has been devastating to the land, air, people, trees, plants, and all beings. We can’t talk about the fire element without that awareness. How do we hold that awareness? What did, and will we learn from it?

Globally, small steps toward forest regeneration guided by the wisdom of indigenous people are being implemented. We are learning about fire ecology from those who have known it for centuries. In Paul Hawken’s book, Regeneration: Ending the Climate Crisis in One Generation, he writes:

Today, as Indigenous wisdom is being recognized by state and federal authorities, tribes are bringing good fire back. Small areas are being burned with low-intensity fires managed by tribal members. But it is not simply a matter of employing proper management practices. Good fire is an attitude. Instead of “fighting” fire as if it were an enemy, the Mono and other tribes view fires as a partner in the critical work of regenerating and stewarding our shared planet. This partnership is woven into the lives of indigenous peoples. Land and fire can’t be separated from culture and history. They can’t be managed abstractly; they are part of a spiritual, social, and ecological whole. It is the whole that matters. [1]

This soul-guided model of regeneration is to connect, observe, see, honor, serve, and cooperate. It replaces the ego-based way of controlling and consuming, which comes from our inability to see our interconnection and interdependence—our wholeness.

A spiritual lesson of fire is learning how to prepare for and welcome the transforming fire of divine love that changes our darkness into light.

The fire center in the subtle body is the 3rd chakra. It is the abode of will and the power of determination. When the spiritual heart beckons us to another way of living, that transforming fire of divine will and determination is activated. It is our commitment to live a surrendered, soul-ignited life.

Spiritual surrender requires tapas, the fire of self-discipline. The discipline of restraining our appetites and transmuting them toward spiritual focus is like building a fire into which we place our conditioned ways of being. The heat from this fire gives off tremendous energy. Like forest ecology, this fire can be used for higher purposes when properly guided and tended.

Once my husband Amarnath was riding in the car with his Guru, Baba Hari Dass, the silent yogi. Amar was in the back seat, Ma Renu was driving, and Babaji was in the passenger seat. Babaji wrote on his small chalkboard and showed it to Amar. He wrote: Human beings have vehicles for moving through the elements—a car is a vehicle for earth, a boat for water, a plane for air, a rocket for space, but there is no vehicle for fire. Amar responded to him: That’s what the guru is for. The guru is our vehicle for fire.

The spiritual teacher helps us transform in the fire of tapas, or self-discipline, so we can actualize our potential and serve a higher purpose.

We align with divine will when we stop asking life to serve us and, instead, commit ourselves to serve life. Then, life anoints us with purifying fire.

A poem by Denise Levertov so beautifully portrays this anointing.

A certain day became a presence to me,
there it was, confronting me—a sky, air, light:
a being. And before it started to descend
from the height of noon, it leaned over
and struck my shoulder as if with
the flat of a sword, granting me
honor and a task. The day’s blow
rang out, metallic—or it was I, a bell awakened,
and what I heard was my whole self
saying and singing what it knew: I can. [2]

Divine love does that. Through grace, it opens our eyes, humbles us, and welcomes us into the holy sanctuary of belonging.

[2] Denise Levertov, A certain day became a presence to me, included in the collection, Earth Prayers from Around the World: 365 Prayers, Poems and Invocations for Honoring the Earth, Ed. By Elizabeth Roberts and Elias Amidon, (New York: Harper Collins, 1991) 344 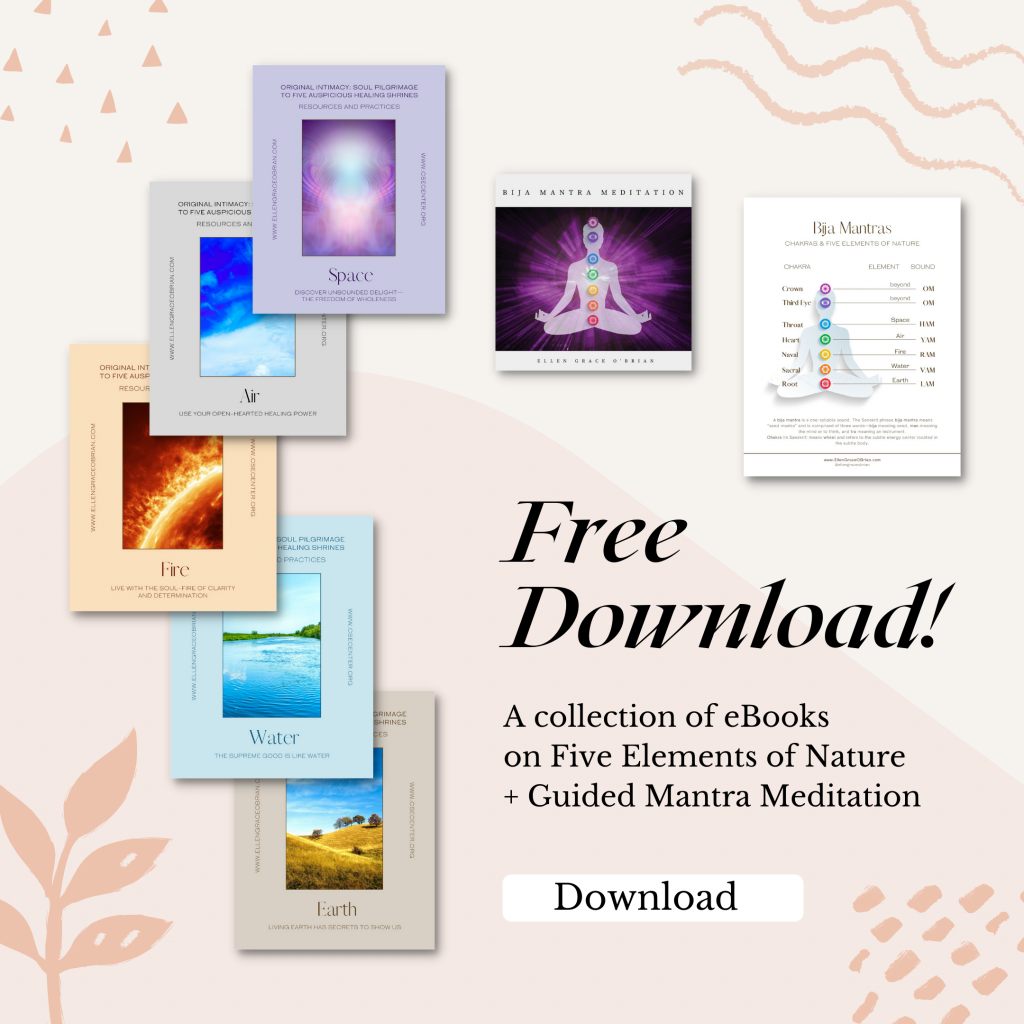 SIGN UP HERE to receive the Original Intimacy Teaching Series Resources to support your journey in this lesson series. Includes five FREE eBooks—one for each of the five elements, mantra meditation practice instruction from Yogacharya O'Brian, lesson video recordings, book recommendations, articles, and many other suggested resources. 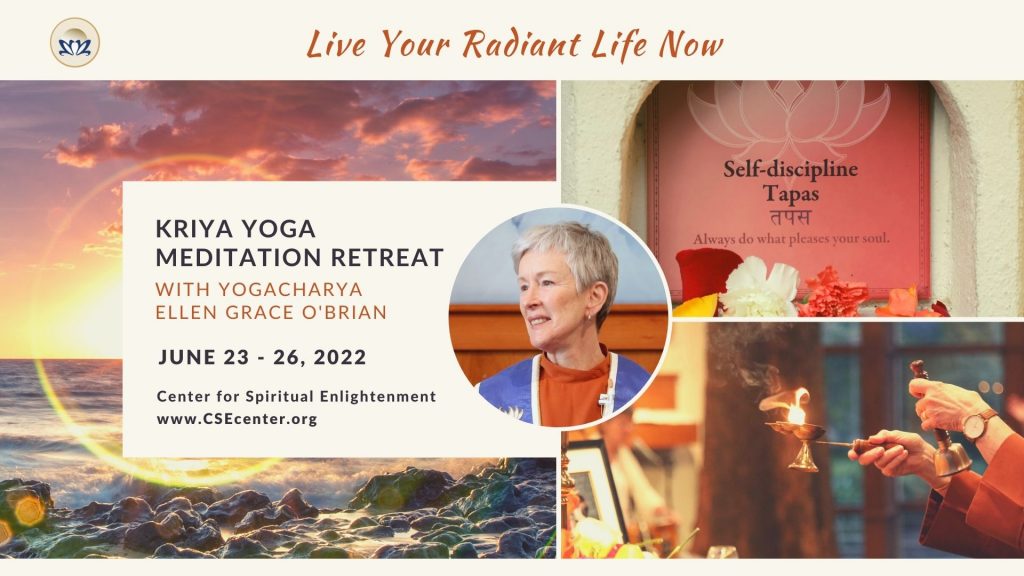 Mastery of pranayama removes the darkness [intellectual dullness or confusion] that veils the light [self-shining reality] of one's pure essence of being. The mind becomes calm and well-ordered, consciousness is clarified, and attention flows easily in the direction of freedom. –Patanjali’s Yoga Sutras

Experience the complete practice of Kriya Yoga which includes contemplation of higher realities, instruction in pranayama and superconscious meditation, and essential guidelines for health, vitality, and harmonious relationships.

Are You Ready to Live Fully, Live Well, and Awaken to Your Full Potential?

Journey through the rest of the elements:

What is Dharma and Dharmic Life

Get support for your journey.

Schedule Now
Latest Offering
The Jewel of Abundance: Finding Prosperity through the Ancient Wisdom of Yoga

Follow @yogacharya_live
Please enter the Page ID of the Facebook feed you'd like to display. You can do this in either the Custom Facebook Feed plugin settings or in the shortcode itself. For example, [custom-facebook-feed id=YOUR_PAGE_ID_HERE].